Before writing your program, you need to know two things:

Because we’re building a simple game, we don’t need to be very detailed. But, we do need to do some planning.

Features of the game

These are the things I want the player to be able to do in the game.

I created a second group of features, to add to future versions of the game.

When working on any program, you want to work on the most important parts first. For this game, it’s all the features listed for the first version. That will give us a basic, but playable, game.

Notice that some of the items have question marks. Those features are ones I don’t know exactly how I want to implement them. I’ll decide on the details when I get ready to write the code for them.

User interface of the game

After deciding what features the game needed, I drew the screens on paper. This is the fastest, and simplest, way to experiment with how you want the program to look.

I don’t have the scanned images, but this is what a test version of the game looked like. 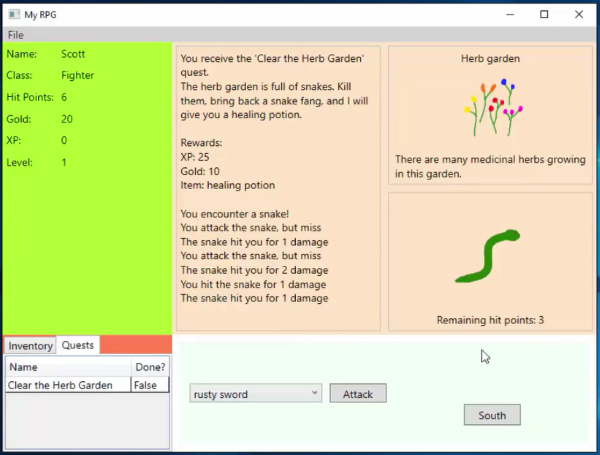 The player’s information is in the upper-left. The lower-left will show their inventory and quests. The lower-right will have the movement and combat controls. And, the large upper-right section will show the player’s current location, current enemy (if they are fighting a monster), and the game messages.

For the first version of the game, we’ll create a small world. This is a map of the locations in the world. 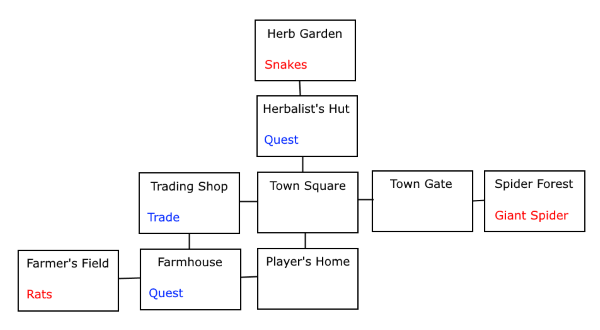 There are only nine locations in this map. But, we the player can encounter monsters in three of them, get quests at two of them, and trade at one location. This will give us a good start, and let us test all the features we need for the first version of the game.

Now that we have an outline of the game, we can start creating it.

NEXT LESSON: Lesson 03.1: Creating the Solution and Game Screen